Mr. Wong Wai Sheung, Chairman and Chief Executive of Lukfook Group said, “We are honoured to receive “The Excellence of Listed Enterprise Awards 2013”. As a listed company, Lukfook has always been striving for sustainable returns for stakeholders. We have developed long-term operating strategies and successfully expanded our global retail network to over 1,200 shops. Moreover, the Group actively supports and encourages its employees to participate in various community and charity activities and contribute to the society.”

“The Excellence of Listed Enterprise Awards 2013” is organised by “Capital Weekly”, a financial magazine, to recognise the listed companies with outstanding performance in promoting corporate activities and successful strategies. It also gives appreciation to those which have made great efforts in implementing corporate social responsibility and contributed to the economic prosperity and social harmony of Hong Kong. The award presentation ceremony was held at Conrad Hong Kong on 18 November. Mr. Wong Ho Lung, Danny, Deputy Chairman and Executive Director of Lukfook Group, received the award on behalf of the Group.

Photo of the ceremony: 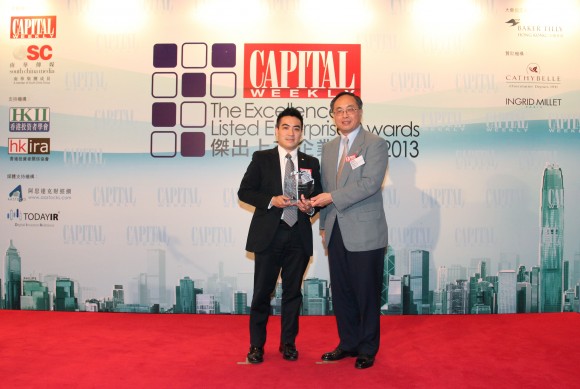