(17 February 2012) ------ Luk Fook Holdings (International) Limited (“Lukfook” / the “Group”) proudly announces that the Group’s design, “The Book of Family Love” was selected as the winning piece (Open Group) in the “Chuk Kam Jewellery Design Competition 2012”. The awarded piece (shown below) was designed by Ms. Chu Wai On, Chief Jewellery Designer of the Group

Mr. Wong Wai Sheung, Chief Executive of the Group said, “We are delighted to have obtained the award in this competition that demonstrates the craftsmanship and quality of our high-end jewellery and gold products. In order to strive for the best, the Group will continue to cater for the consumers’ taste and demand, focus on quality and creative designs and lead the trend of jewellery design. So as to enhance its brand image with trendy jewellery.”

Organized by the Hong Kong Jewellers’ & Goldsmiths’“Chuk Kam Jewellery Design Competition 2012” is one of the major events in the local jewellery industry. The competition aims to stimulate the creativity and raise the standard of craftsmanship of gold jewellery design in order to promote gold jewellery and better serve the market demands. The fourteenth winning designs are being showcased at Hong Kong International Jewellery Show from 16 to 20 February 2012. The presentation ceremony was held at Hall 3C, Hong Kong Convention and Exhibition Centre on 16 February 2012 (Thursday). Mr. Au Kwok Kau, Group General Manager and Ms. Chu Wai On , Chief Jewellery Designer of the Group received the award on behalf of the Group. 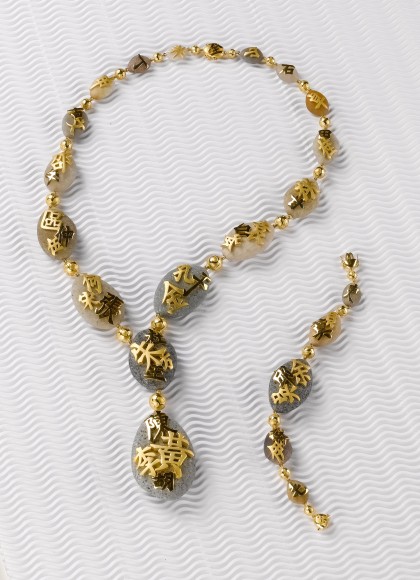 Photo of the Presentation Ceremony: 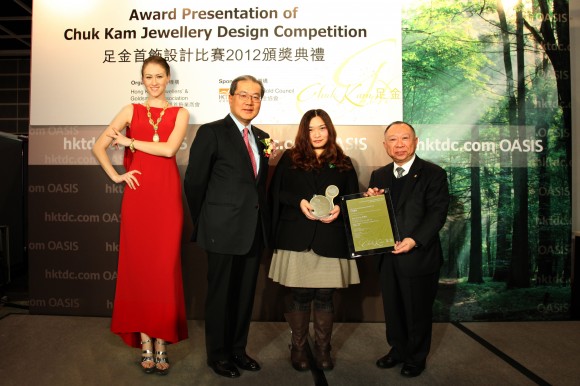